I went to the mall today to get a pair of Doc Martens and as soon as I pulled into the parking lot, I was irritated.

The place was packed.

Usually I go to the mall during the week, when there’s less people to piss me off, but I wanted to get these damn Docs today, so I parked and hurried my ass in.

What a cluster fuck.

Not to be discouraged, I headed to the store that I knew sold Docs so I could get them and get the hell out. Much to my displeasure, the shoe store only had three black Docs available, none of which were suitable.

Not to make the trip a complete waste, I headed to Hot Topic to pick up a belated Christmas gift I never got around to buying. I happen to like some of the clothes in Hot Topic, but I always feel like a poser when I go in there. Ironically, many of the clothes they sell are shirts with TV shows that were on when I grew up. So, in reality, they are the posers, not me dammit.

After I grabbed the gift, I headed to Suncoast ’cause they always have the best toys on clearance. Fuck this ‘action figure’ bullshit, they’re toys. I call them like I see them and I have plenty of them. And, ZOMG, they are out of the package, on display, around the house. Collectors be damned.

So I grabbed one of McFarland’s toys from “The Infernal Parade” series, and another “action figure” to be mailed out to a friend, and headed to the register.

Once at the register, I was stuck behind a “talker.” Well, actually two talkers. The employee and the customer were just having a dandy conversation. Interesting as hell, too. Too bad you can’t hear the dripping sarcasm.

Luckily, though, I was saved when another employee came behind the counter and waved me over. I could tell she had no time for the dandyness the other two were involved in.

As she was ringing me up, she mentioned that she had tried on a pair of pants, but they were too small and she was like “what the hell?” I noticed she was thin, but my mind was on other things, so I simply nodded.

Then, looking at my purchases, she said, “You going to go see Hostel?”

Yeah, now we’re talking. I said, “I want to. I still need to see Wolf Creek. Have you seen that?”

“Yeah, it’s really good. It really reminded me of The Last House on the Left. I’m a big fan of exploitation.”

I said, “Have you seen August Underground?”

“Review? Who do you review for?”

“No shit? What’s your name over there?”

“No shit? I’ve read your reviews. I just read that one, uh, shit. The J-Horror one.”

Now that’s what I’m talking about. I’ve received emails before on my reviews, but this was the first a “real live” person mentioned them. So today the myspace kudos go to Suncoast Girl because she made an otherwise shitty trip to the mall bearable. 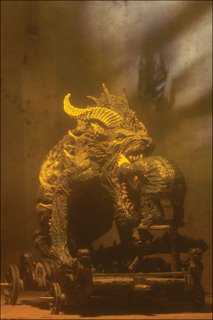 You left out the part of the conversation where you asked if she was over 18.

And also the part where she called the cops to get the restraining order.

Is kudo the singular of kudos?

Either way, what’s it mean, for we the non-Myspacing.

And congrats! You’re just the HT poster boy these days, aren’t you?

Someday, when you’re on TV with Roeper, I’ll say I knew you when.

Leslie, indeed I did leave both of those out. 🙁

Ace, shit, until I have a movie made, I ain’t got nothing on you.

And I’ll be rooting for those damn Raiders of yours tonight.

Ace, shit, until I have a movie made, I ain’t got nothing on you.

Nice, maybe you’ll get some action from the Suncoast girl based on your notoriety! Make sure you tell her you’re a PRODUCER too! That’s always gets them wet. 🙂

I would have been over here sooner, but I was over at Aric’s blog whigging out over the wav files. I think I nailed it. Go play!

Lesley, I have no idea what you are talking about. (God, it must bug the piss out of you) LOL

Ace – I had forgotten to mention that the myspace kudos are something offered on myspace blogs. If you like a blog entry, you can give a kudo.

aric – women get moist at the very site of me. no name dropping and job dropping necessary.

nOrMaN – Happy New Year to you as well!

It doesn’t really bug me that much, except we had *just* talked about it. Plus there’s the Starbucks thing. I hear they’re hiring, you know.

There’s a song by BNL called “Be My Yoko Ono” which I just had to listen to, in light of the recent Yoko theme. Good stuff, but now it’s co-mingled with “Light My Candle” in my head. Bah.

And, it’s Doc MartEn not Martin.

I’ve never owned a pair, sadly enough. It’s always been Sketcher, Bass and a pair of Timberlands, once.

I have no excuse.

Lesley, you should mash songs. There’s a Britney Spears AC/DC mash I like.

“Ironically, many of the clothes they sell are shirts with TV shows that were on when I grew up. So, in reality, they are the posers, not me dammit.”

Nice to know i am NOT THE ONLY ONE who feels that way about shopping in Torrid/Hot Topic.

I thought you thought the MySpace users over 30 looked like pedophiles???? :p

I’ve never owned a pair, sadly enough. It’s always been Sketcher, Bass and a pair of Timberlands, once.