I went and picked myself up a moleskin notebook today because I want to be cool like Renaldo and Lesley.

I had some reservations because Borders had these things so damn shrinkwrapped that I couldn’t check them out before I dropped the $14.95 on the one I wanted.

So I stole it. I’ll be damned if I’m going to drop coin on something I can’t even check out.

Okay, okay. That’s a lie. I bought it anyway because of the good word on it from, as said, Renaldo and Lesley, in addition to Renaldo’s stellar review of them.

I mean when a seemingly normal guy goes nuts over a little notebook, how could I not buy one?

Anyway, I opened it up when I got home and I must admit that it’s pretty nice. I can see myself buying many of these. Hell, Hemingway used one and he was a pretty popular guy from what I hear.

Maybe I’ll write the Great American Novel in a few of them.

Or ideas for the next NaNoWriMo.

Either way, it was a solid purchase because it’s the kind of notebook you want to fill up with words. Not just any words, either. Any words should be relegated to the likes of those spiral notebooks from the other side of town. The words one puts in a moleskin better be carefully chosen because the Moleskin Notebook has no time for any Tom Foolery. 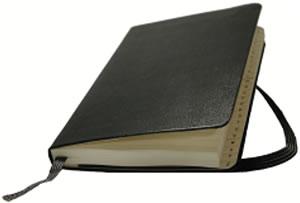 Oh great. You wrote about the Moleskine notebooks here, now the whole goddamn DHW Nation is going to want one. They’re all rushing to Borders as we speak and yelling at the guys behind the counter that they don’t want a black one, they want a PINK one! Nice going. I can’t explain my love for these little books. I have many. And I always need to have one in hand still in its shrink wrap or else I get a little nervous. And you don’t buy a moleskine because you *want* to be cool; you buy it because you… Read more »

Lesley – Oh, I am cool, but I wanted to be modest.

Ace – For me, that’s part of the appeal. The death of many animals for one little book.

Moleskin? How many moles die for each of these notebooks?

I might’ve wanted to get one and pretend to be cool, too. But fur is murder.

I would never buy one of these for the sole reason that Hemingway used them.

He was a hack and a fucktard.

And yes, I am not afraid to say that because he is dead.

Damn. That is a good question. They both suck hard.

I might have to go with King just because.

Moleskine notebooks rock. Not the pink ones, the regular black ones. In various sizes, no less. I have a drawer full of them. Mostly unopened. Stewie is now 10% cooler than he was before.

Fnordboy is now 15% less cooler than he was before.

How does one go into negative cool?

For people like you and me, it seems as hard as walking on water. For people like Fnordboy, they do it without even thinking about it, every time they get up in the morning.

Your insight never ceases to amaze me.

This the same @RepMTG that cheated on her husband with multiple men? That Christian?

Our neighbor, @RepMTG, tried to block the Equality Act because she believes prohibiting discrimination against trans Americans is “disgusting, immoral, and evil.”

We're now learning that the Capitol Police may have had advance warning about the January 6th attacks, which means they must have infiltrated a secret white nationalist terror network! Or they’re on Twitter.

I seriously love this woman.

I'm 100% sure this is @Jim_Jordan pretending to be a middle-aged lady and trying to get the boys to play in his yard so he can eyeball them. He has a history of this sort of thing.