Who ever said that should be punched in the face.

Then, when they go to the hospital for the concussion I gave them, we’ll see how happy they are when the hospital refuses treatement for not having money.

Money can buy you any damn thing you want. You just have to know how to spend it. The guy who said it can’t buy you happiness was the worst investor ever and should have kept his mouth shut.

You can’t have your cake and eat it to.

Huh? What? Excuse me? What in the fuck, exactly, does that mean?

“Happy Birthday, Johnny! 7 is an important age! Whoa, there, Johnny! What are you doing with that cake? Son, you can’t have your cake and eat it too!”

Sounds like somone should call CPS on mommie or daddy dearest. Dicks.

Never put off tomorrow what you can do today.

Shutup asskisser. Some of my best term papers were written the day they were due.

A penny saved is a penny earned.

I have 3,000 pennies in a jug I started about four years ago. That’s about thirty bucks.

I’ve earned thirty bucks in four years. Yeah, I’ve earned some pennies, but it doesn’t seem to be worth the time invested.

He who laugh last laughs best.

That’s cause he’s an idiot and he still doesn’t know why he’s laughing.

We need better slang or anecdotes or whatever the hell you want to call them. They’re old, they’re dated and they just don’t make any sense anymore.

I’ve come up with a few that you should start using in your day-to-day life. Maybe they’ll catch on and be as popular as the ones above.

If you see OJ, kill him.

You know, if enough people say it, and it becomes popular, someone just might do it. Don’t think it will happen? Tell me you’ve never had a coke and a smile.

A cult always ends up badly.

That one could save you some heartache the next time your new friends want to pass your 13 year old daughter around the commune like the town Harlot — all in the name of Bob. Something to think about.

Take it from me, that’s why they have stairs and elevators. No need to hurt yourself.

Now all I have to do is wait for the fuckwad to tell me that may examples aren’t the same as the examples that have been around forever.

Before you do, I don’t give a fuck.

And, on a side note, I’m still dicking around with this Picasa program, so here is a kick ass picture of me and Steve f’ing Railsback (not to be confused with Lance f’ing Henrickson). 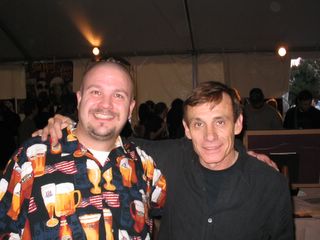 I think I just discovered a fetish I didn't know I had.

Things from the past 📷🎥@moodvintage

Big news! Our adventure #horror anthology, FAR FROM HOME, will be coming out May 15th!

If you like podcasts, @CriminalShow is a really good one, and one of the latest is about one of the first spiritual photographers, William Mumler. https://thisiscriminal.com/episode-159-spiritual-developments-2-26-2021/

ANNNNNNDDDDDD for as much as I pay for Betty's Eddies, is it to much to goddamn ask for the pieces to be wrapped in goddamn paper THAT DOESN'T STICK TO THE FUCKING CANDY.

I'M NOT HAVING A GOOD TIME RIGHT NOW.

These motherfuckers. THIS ISN'T FUCKING DIFFICULT.

And FUCK anyone who votes for them.